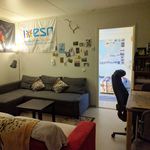 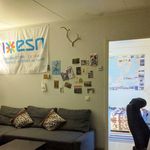 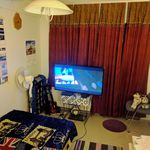 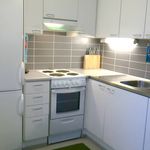 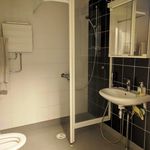 Its a 41m2 comfy apartment (a bedroom + a living room + balcony + kitchen + wc) in the heart of Helsinki (about 18 mins from city center and about 32 mins from Helsinki-Vantaa airport by public transport).

I also have a full-size kitchen (along with more than enough utensils you will be needed), toilet and shower. It is also possible to use washing machines, gym and sauna as well.

The apartment can accommodate a family with/out kid(s). Alternately, since there's a bed in the bedroom and a sofa-bed in the living room, so, two student or colleague can share the apartment.

Considering the population, Helsinki is not a very big city, but most of its area is covered by nature. So, for the same, one side of my apartment is attached with the city crowd and the other side to the nature. Several Baltic-sea-beaches and also party places are pretty close. A playground, park and walking/running track is right next to the building and the biggest swimming hall of Finland and also a huge sports-hall is only 4 mins walking distance.